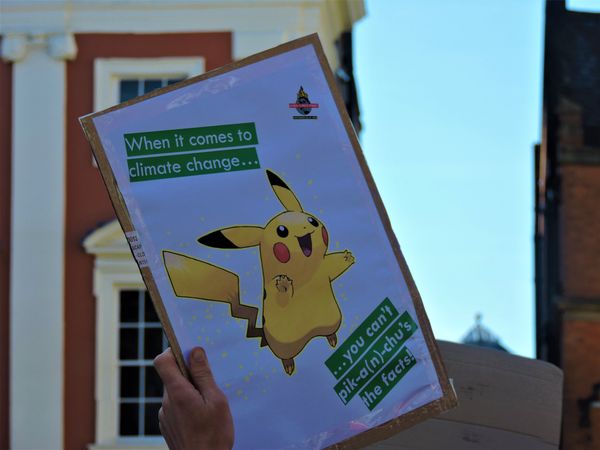 Five days into the Extinction Rebellion protest, forts are still being held and the antics are on the up. From climbing on planes to blockading the BBC, they rebels are certainly getting noticed.

However, many people have asked me what they actually want. It's a good question. They can use buzzwords like 'carbon footprint' all they like, but what are they hoping to be the result of all this? What tangible change do the protestors want?

I often worry when I interview rebels that I'll be condemned for eating the chicken sandwich I packed for lunch. Or that I've worn something that's the wrong material. Or that I'm just not environmental enough as a whole. But in fact I've been met with very helpful responses.

1. It's less about the individual, and more about the bigger companies.

This isn't to say that we can't make a difference by eating more veggies or walking instead of driving. But to make a real impact it would need to be a group effort. The kind of group which spans the planet.

This is why Extinction Rebellion are doing the drastic things like climbing on Aeroplanes. They're trying to target the bigger companies to encourage them to reduce their impact on the carbon emissions.

This links back to a study in 2017, when the Carbon Majors Database released a report showing that 71% of the World's greenhouse gas emissions since 1998 were down to just 100 companies.

2. A lot of what we do every day is controlled by what we have access to.

When we are doing a trolley dash round the local supermarket it's very easy to choose the brands we know and love, or those that are the cheapest. However, a lot of the time these can end up having drastic air miles (meaning they've travelled a long way).

It's interesting to think that:

If you pay attention to the labels it can be quite interesting to see when one tomato is from Kent and another from Peru. Now, they're a whopping 9,813 miles apart, but by the time that tomato is in your BLT you don't give a damn.

It's easier to justify a peruvian tomato if it's cheaper or it looks more red. But maybe that isn't the point. Maybe we need more supermarkets stocking locally grown veggies so that our tomatoes don't have a more exciting holiday than us.

When we talk about consumerism, it's also worth considering technology. We are in the digital age of constant innovation and creation. In some ways this is wonderful; we can develop technology to further research and help people. We can create things that contain more detailed design than the rocket which got man to the moon.

The evolution of technology over thousands of years with the world's greatest minds and the latest materials has led to...selfies.

I remember, age 14, I had a pink slide-up Samsung. I used to pretend it had a touch screen by timing swipes with the relevant manual buttons. And boy, it made me feel alive. I yearned for the day when I could use a real touch screen. And now, my dreams have come true. I have a touch screen. But lord forbid it lags for just a second and I will swear at it with all letters of the alphabet.

When did it get to this? When did I go from dreaming with my Samsung to getting mad at a phone I couldn't imagine would have existed as a child.

Unfortunately, that's happening a lot at the moment. With new, better technology coming out constantly we always idolise the latest greatest creation. We want to have what's better, almost out of fear about being left behind. However, the result of this is mass productions all over the world and people chucking away old things as soon as they get something new. It almost seems like we should go back to the 2005 state where phones were still new and exciting. We could call, we could text and we could play snake. That's all you really need.

I guess it's down to each of us to decide how we want to live, and whether we want to take more control over these parts of our lives. Phones lose battery and food gets eaten. But the planet is always here. Hopefully.

This is the fifth article in a five-part series on the Extinction Rebellion.