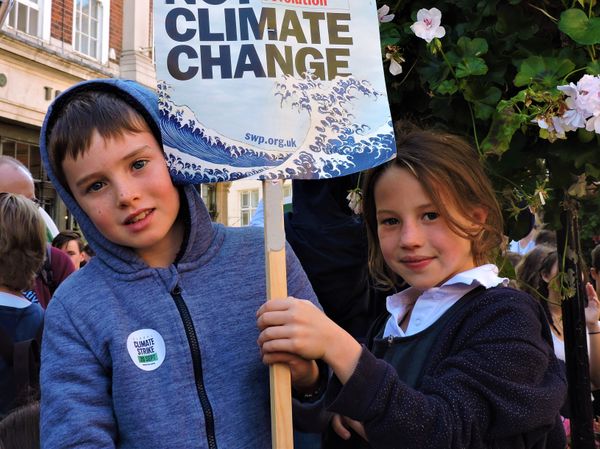 The more I see the rebellion unfold in London and across the world, the more I realise just how many people are involved from all walks of life. The young, the old...all races, genders and bases. It almost convinces me that protests create more solidarity than antagonism.

I will openly admit that growing up I imagined all environment types as hemp-wearing hippies tied to trees with a blunt in one hand and a picket sign in the other. Looking back now, I realise that I based a lot of this on what I'd seen in the media. Especially The Simpsons. So, when a young girl from Sweden stood up and encouraged the world to leave school and stand outside their Parliament on Fridays I was actually very encouraged.

In the back of my mind I had grown up knowing something was wrong with the way we were treating the environment. Though I never really understood why the only people doing something about it were non-existent cartoon characters. At the ripe old age of 21, I'm so glad to see young people finally learning about climate change and standing up for it. However, at the same time, it's so difficult seeing a child of five holding a sign saying "You destroyed my future".

So while I do admire young people protesting for their future, and actively learning the science behind it, there have been concerns raised over the welfare of young people being put in this situation of striking and fear. Perhaps it was better in my day when I didn't really understand what was going on, because then I couldn't be afraid of the death of the planet. As the idiom goes; "What you don't know can't hurt you".

As I am writing this, it is World Mental Health day. It's no surprise that the number of young people with Mental Health difficulties has risen over the last few years. The Mental Health of Children and Young People in England survey conducted by the NHS in 2017 revealed that:

Have we considered that maybe involving young people in protests and teaching them information about global warming could be making them ill?

While this is a possibility, I would like to contend that the bigger danger to young people is the constant labelling and verbal attacks from people three times their age. In recent years, the term 'Gammon' has been used to describe angry, older men who become flushed as a gammon when talking about something or someone they disagree with. Gammons or non-gammons, the 'Generation snowflake' branding has demonstrated that plenty of people will turn against children for no particular reason. Maybe it's jealousy. Maybe it's fear. Maybe it's shock at how young people have gathered together and done more than a lot of us couldn't do. And no young person has felt this more than Greta Thunberg.

In the storm of the media and the chaos of the rebellion, there's something inspiring about a young person taking a stand. As a Gen-X myself I'm familiar with the branding of 'Lazy, tech-loving snowflakes'. But this. This proves otherwise. On a grander scale it proves that if there is an issue big enough, that we as society feel strongly enough about, age is only a number.

The protests have seen school children on the streets to 92 year old John being arrested outside Downing street. They are the Extinction Rebellion. Age, race and gender are irrelvant. They want the same thing, and so, they're going to fight together for it.

Maybe this is something we should take into account more. Finding common causes such as poverty, racism and sexism, and coming together regardless of background to have an impact like no-one has ever seen before.

This is the fourth article in a five-part series on the Extinction Rebellion.